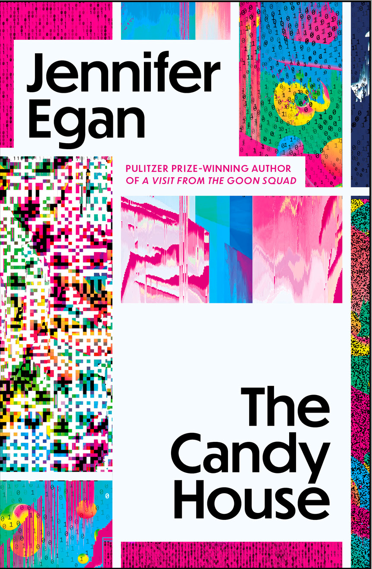 So full of longing and tenderness and strangeness . . . the perfect antidote to the terminal drudgery of these mid-COVID election times

Moving from 2010 in New York City, where a tech entrepreneur is on the precipice of greatness, back to the 1960s and a hippy commune in the middle of a Californian Redwood forest, and ahead to a super-secret Mediterranean spy mission (and everywhere in between) – there’s virtually nowhere Jennifer Egan is afraid to venture in her extraordinary new novel, The Candy House. Intended as a companion piece to her Pulitzer Prize-winning A Visit From The Goon Squad (and featuring some of your favourite – or at least the most memorable, depending on how you feel about Egan’s characterisations – people from that novel) The Candy House is both an utterly absorbing read and an immense meditation on the connectivity and disconnection of our technological super-future.

The story ostensibly centres on Bix Bouton, the aforementioned tech entrepreneur whose Great Work is still on the horizon in 2010 when he attends a gathering of Columbia professors disguised as a PhD student. Inspired by the discussions at that gathering – and the work of a tenured professor of anthropology, Miranda Kline – Bix goes on to create a technological revolution that changes the force of connection and culture forever. But Egan doesn’t really stay with Bix for long – soon we’re off in the lives of people Bix has met, and the people those people have met and loved, as well as those who have been most deeply impacted by Bix’s ingenious (and somewhat dastardly) invention. Just when you wonder what it is you’re doing on in a country club in upstate New York with a bunch of tweens having a friendship upset, Egan brings the story wheeling back around to centre, and you’re oriented again in these essential questions of connection and curiosity that drive The Candy House.

It’s tempting to describe The Candy House as a sibling to Black Mirror, but the technological curiosities Egan concocts are merely jumping-off points for developing more serious meditations about community, care and coping than anything  contained within that downspiraling Netflix series. There is such sophistication in the way Egan creates a world that feels simultaneously fantastical and utterly plausible, and to the ways in which she connects Bix Bouton’s invention back to other real-world technological advances (there is a rather droll meditation on Napster that feels somehow both sobering and cheeky).

And, as with Egan’s best work, what draws you through the pages are her incredible characters, each one so very individual, bizarre and divinely in need of protection. I can’t think of many other works in which I might read about a young man so fed up with pretension, he devolves into screams – full-bodied, at random – just to elicit an unguarded public reaction. I truly loathed some of the people I met in The Candy House, and yet felt deeply attached to every one of them (especially my very favourites, the oddball Molly and her unbridled mother, Noreen).

This vastly unputdownable book combines all Jennifer Egan’s clarity of prose and purpose, with an intense and unique understanding of where the world is and where it’s likely going. So full of longing and tenderness and strangeness, The Candy House is the perfect antidote to the terminal drudgery of these mid-COVID election times. It’s also sure to be on some shortlists come awards time (hello, Booker!).