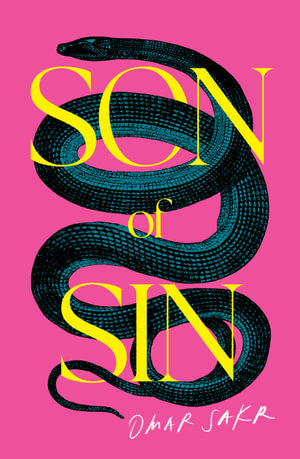 Son of Sin is a complex, raw and mightily moving novel, possibly the best release of 2022 — and it’s only March!

Why aren’t more poets turning to prose? For poet Omar Sakr’s first novel, Son of Sin, is certainly proof that many more should. In Son of Sin, a confused and deeply repressed boy, Jamal, has grown up passed between members of his family without truly knowing “home”.

Jamal is, at once, coming to terms with his place in his mother’s family, discovering the importance of his father’s legacy in his life, and learning to accept himself as a queer Muslim man. And this is all against the backdrop of some of so-called Australia’s most critical moments in its racialised history – the Cronulla Riots, for example, are a foul and full-featured point in Jamal’s formative years. Although it is fiction, this feels like a perilously personal work for Sakr, who is also a queer Muslim man.

The book is breathtakingly beautiful, aching with imagery that sucks you in and holds you tight. Young Jamal prays in the book’s opening and Sakr describes the action as a crown being laid on a head; Jamal’s night sleeping on the front lawn of his mother’s house brings him in contact with mischievous bats who leer and laugh at him in a manner that could be real or dreaming – Sakr won’t tell. But, although it is beautiful, it is also heavy and not for the faint of heart. The book can be violent and shocking, and my heart ached for Jamal as he spun further and further into (as the title suggests) his impressions of his own sinfulness. Sakr’s prose has been compared to the early work of Christos Tsiolkas, and it’s easy to see why: both authors have a very human, masculine beauty to their work.

A complex, raw and mightily moving novel, it’s possible March has already brought us one of the best releases of this year in Son of Sin.

Purchase a copy online or instore